The origin of smallpox is unknown;[13] however, the earliest evidence of the disease dates to the 3rd century BCE in Egyptian mummies.[13] The disease historically occurred in outbreaks.[10] In 18th-century Europe, it is estimated that 400,000 people died from the disease per year, and that one-third of all cases of blindness were due to smallpox.[10][14] Smallpox is estimated to have killed up to 300 million people in the 20th century[15][16] and around 500 million people in the last 100 years of its existence,[17] as well as six monarchs.[10][14]As recently as 1967, 15 million cases occurred a year.[10]
source Wikipedia

A child with smallpox in Bangladesh in 1973. 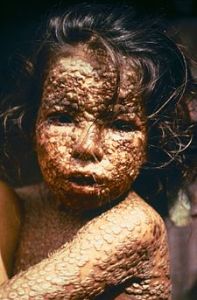 The bumps filled with thick fluid and a depression or dimple in the center are characteristic.

A horrid picture isn’t it?!
Smallpox was horrible for anyone, especially children.
More children died than adults. Thirty (30%) percent of the people who contracted smallpox died.  That’s a lot.  Even so, that is a 70% survival rate, but some had residual blindness.

So, Science gave us a VACCINE. One dose and no smallpox.

The facts are different with Covid 19.
If a child gets it all – very few – for teens and young adults, the recovery rate is 99.997%. Presently, no residual effects.
And according to the CDC, 70 years and older, your recovery rate is 94.6%.  Source
And with these horrible death rates the WHO and who knows who else, set out to give us a vaccine!

But alas this ‘vaccine’ is a two-dose and must be renewed annually and the recipient is still not assured that he or she will not get Covid, however, if you do, it might not be as bad.
Actually, there are NO guarantees with this Covid ‘vaccine’.

The risks are still unknown and I am told when one is injected with this ‘vaccine’ a waiver must be signed, resulting in, NO ONE is responsible for any ill effects.
In summary, NO ONE can be legally held responsible, be the effects minor or even result in death.

What’s wrong with this picture?

Please do not let the blindness of this world prevent you from seeing.

4 thoughts on “Who Knows Who Else”